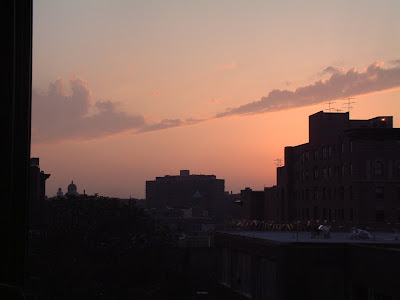 Late night in the country ass city. There is a nice fog and it's warm for December. Today I went out alone. It's strange sometimes because usually I'm in a constant state of mommy awareness when I'm out with the kids so to be out alone and only have my one self to be responsible for is strange and yet mildly familiar.

My writing world: It's getting lusher. I have a few notebooks that I carry around. I keep notes on the novel and write little journal type things in them. I have not been journaling as much as I used to. I used to be on it two to three pages of brain drain. Now, half a page to one page of interesting, good things, budgets, to do lists. I'm trying to get to the point that whenever my kids say something smart or funny I have the paper and pen right there ready.

I heard Toni Morrison on NPR today as I did the breakfast dishes. She spoke about a lot of stuff but what stuck with me was the idea of complicated characters. I look at the histories as I reread my current manuscript and do this literary sankofa and go back to my old edits and piece this book together because I've created real histories for my characters and they are not cardboard at all. Which is exciting because your characters then have depth. You empathize with them. You might see aspects of yourself. I've been editing forever but as I find out things like it took J Diaz eleven years to finish his last book I feel like OK I can do this.

I'm working on writing the latest synopsis. I realize some of the things in the summary are not directly talked about but are eluded to in the actual novel.
Get the whole description of the story in one page. I have something down for this new version. It's kinda fun.


On the bus: Today on the bus an ahole talked loudly to his friends about how he steals from certain stores that are not expecting him to steal. He said if they don't have what he wants by the door he is not taking it. "If I have to take an escalator, the steps or an elevator I ain't stealing it cause I'm gonna get caught." I openly stared. He didn't seem at all ashamed or regretful. He was also an older man in his late fifties maybe.

An annoying man sitting in front of a couple "is that man your father?"
"No he's my husband." she said. "No way, That guy is old." said the high drunk man
"No way!" everything the woman said he said "uh uh. nope. you are too young."
i heard her say she had children who were a certain age. I heard her say she was in her thirties. She was really explaining things to this person, eventually they got up and sat in the back of the bus. The same man started yelling "hey man reading the newspaper....hey man wearing glasses....dude with the vest.....hey sir." The man was smart and feigned interest in his paper.
Posted by Mirlande Jean-Gilles No comments: